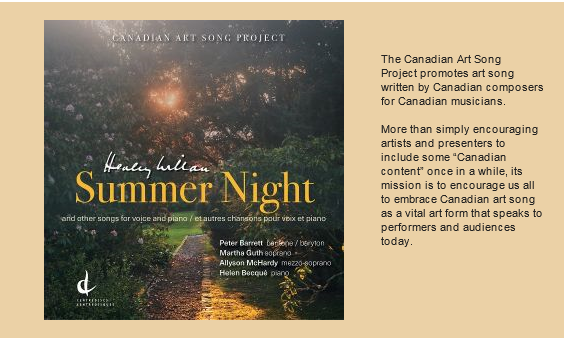 The Canadian Music Centre congratulates our CMC Associate Composers who were nominated for Classical Composition of the Year Award:

Classical Showcase Concert
The Canadian Music Centre will co-present along with CBC Music the twelfth annual JUNOfest Classical Showcase concert on Saturday, March 14th at Convocation Hall in Saskatoon SK. Details about the event, including the artists who will be showcased, will be released shortly.

About the Canadian Music Centre (CMC)
The Canadian Music Centre is a catalyst that connects you to the ever-evolving world of musical creation in Canada through performance, education, and promotion. The CMC provides unique resources for exploring, discovering, and performing Canadian music. We are passionate about nurturing a musical community that honours our legacy and supports the professional development of Canadian musicians and composers.

About the Composers
Toronto based composer Rose Bolton is well established as a composer who creates and envisions new sounds in the areas of classical and electronic music, as well as music for documentary films. Bolton’s works range from orchestral, chamber and vocal music to electro-acoustic and ambient electronic. She has received numerous commissions and prizes, including the 2006 Norman Burgess Fund award, and the Toronto Emerging Composer award. Her works have been performed by major ensembles across Canada. She has also composed full scores for two CBC television documentaries, The Disappearing Male, winner of the 2008 Gemini Award for Best Science and Technology Documentary; and Surviving The Future.

Vincent Ho is a multi-award winning composer of orchestral, chamber, vocal and theatre music. Currently Artistic Director of Calgary’s Land’s End Ensemble and New Music Advisor to the Calgary Philharmonic Orchestra, this is his third JUNO nomination. During a visit to the Arctic, Ho spent days observing the landscape, and developing a spiritual relationship with the environment. Ho’s “brilliant orchestration creates vivid pictures drawing on the full resources of the modern orchestra” (The Whole Note). He is the 2019 recipient of SOCAN’s “Jan V. Matejcek Award”.

Raised in Vancouver BC, Jared Miller studied at the University of British Columbia before becoming a Doctoral Fellow at the Juilliard School. He is the recipient of the SOCAN Award for Young Composers. In 2019, his composition Under Sea, Above Sky was premiered by the National Youth Orchestra of Canada.  He has worked with many ensembles in North America and internationally, including the Toronto Symphony Orchestra, the Juilliard Orchestra, the Detroit Symphony Orchestra and the New York City Ballet’s Choreographic Institute.

Originally from St. John’s NL, Bekah Simms has been heralded as “nuanced and complex” (NOW magazine) who is “redefining classical music” (Ludwig Van). Her music has been featured across Canada, in over a dozen American states, Italy, France, Germany, Austria, Lithuania, and the UK and interpreted by a diverse range of top-tier performers including Esprit Orchestra, Continuum Contemporary Music, the Victoria Symphony Orchestra, the Madawaska Quartet, TorQ Percussion Quartet, and Duo Concertante. Simms has received numerous awards, including the 2019 Barlow prize and the 2018 Karen Kieser Prize in Canadian Music.

Serbian-born composer Ana Sokolović has lived in Montréal for two decades, where she teaches composition at the Université de Montréal. Her work is suffused with her fascination for different forms of artistic expression. Sokolović is prominent in the Québec, Canadian and international contemporary music scenes, and has earned a steady stream of commissions and awards. She recently received a prestigious commission from the Canadian Opera Company for a main-stage opera that will be premiered in 2021.

Click here to learn more about Centrediscs and to buy albums